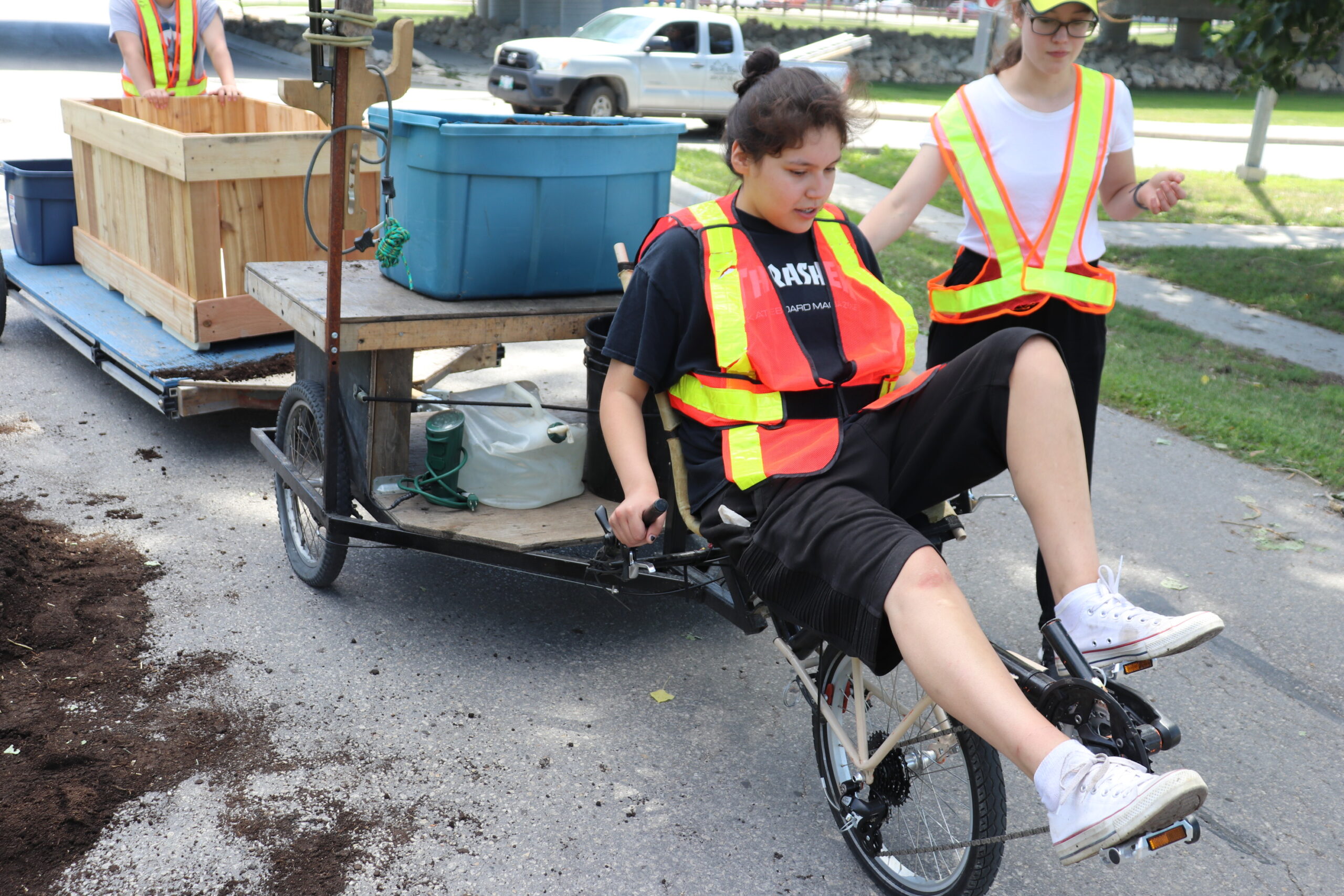 The Healing Trails project, which began in 2020, is an Indigenous-led initiative that was developed with support and resources from the Winnipeg Trails Association. It involves re-thinking transportation systems, building capacity among young people, reintegrating Indigenous language into public spaces, and creating tangible real-world projects.

With the motto, “Healing the Land to Heal the People”, the project is focused on transforming roads to reflect the culture and values of Indigenous people.

“We think that pathways should be accessible to people through all the stages of their lives,” noted Janell Henry, Project Manager of the Healing Trails Project, who is from Roseau River Anishinaabe First Nation. “Indigenous people dream of roads with street signs in Ojibwe or Cree; cities that give priority to snowshoeing in the winter; and travel ways that are lined with medicine plants and Indigenous art. We wanted to see if we could transform one street in the city to reflect our values in a way that might be replicated across the city.”

The street selected for this project– Rover Avenue – is a wide street that runs beside the Red River and connects to the Annabella underpass. It is the site of Winnipeg’s first painted bike lane. Rover lies along the only low traffic access point under a railroad that bisects the western half of the city. Despite being part of a national trail, Rover Avenue has long been a road that invites fast driving, while a trail on the river side of the road attracts people pushing strollers and riding bikes with young children. 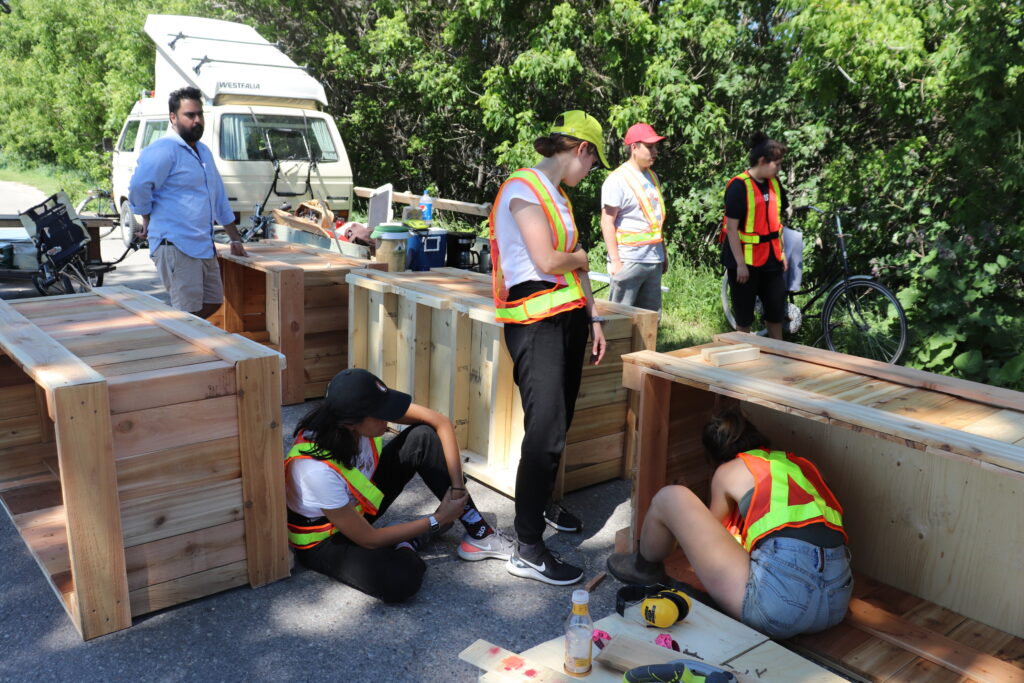 The project team went door to door to meet people in the neighbourhood and tell them about the project. They then began building ten cedar planters – which are the size of a car – with the intention of installing them along the length of Rover Avenue to create chicanes that would dramatically slow automobiles along the road. When they were unable to get permission from the city to do so, they positioned them along one side of the road – close enough to the curb to be acceptable to traffic engineers but far enough out to narrow the road. This immediately slowed motorized vehicles and made it somewhat safer for people to travel on foot and bicycles.

The planters were filled with soil and medicines such as food plants that are considered medicine by Indigenous people and healing plants such as cedar, sage and sweetgrass. The result is a street filled with squash, tomatoes, saskatoon bushes and basil growing where asphalt once was. Way-finding signs have also been installed along the road in Cree and Ojibwe as well as English. 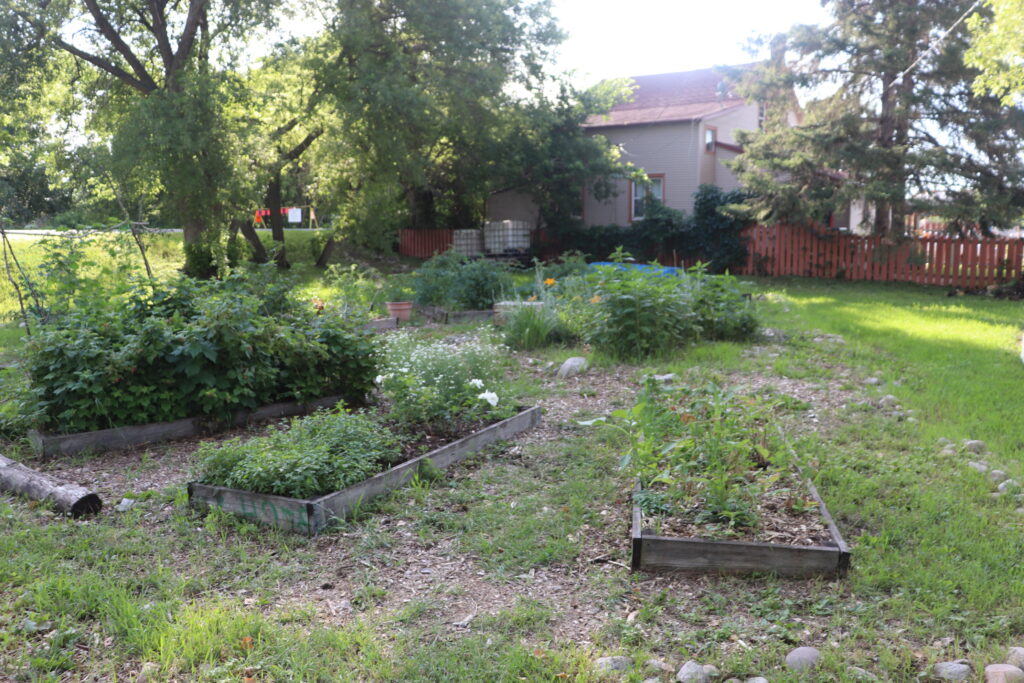 The Healing Trails Project was able to infuse Rover Avenue – a street that can be used by hundreds of cyclists and pedestrians each day in good weather – with a taste of Indigenous languages, culture and landscape with about $15,000 in funding. It also laid the groundwork for retrofits done on two other streets in Winnipeg – McDermott and Bannatyne –  and will be replicated in future projects done by the Winnipeg Trails Association as funds are secured.

“Through the Healing Trails project, we were also able to contribute to the development of two new logos for the Trans Canada Trail which includes Cree and Ojibwe for the first time. We also mocked up a map of desirable access points to identify new and exciting river-focused programming and Indigenous cultural-themed tours along the ‘Great Trail’ with a special focus on the canoe-culture of the Anishinaabe,” offered Anders Swanson, Executive Director at the Winnipeg Trails Association. “We would like to see this approach taken more often in Winnipeg. We would like to see Indigenous languages, culture and approaches to life embedded in the way that we do everything in the city.”

“In the first year, with about $100,000 collected from a number of different funding sources, the Healing Trails project created eight full-time or part-time seasonal positions for Indigenous people in Winnipeg,” noted Janell. “We were given the chance to lead, to develop new skills, and to take stewardship of the land, using our languages, and our ideas. We have also presented our work multiple times on local and international stages.”

The Healing Trails project also inspired several other projects designed to cultivate Indigenous languages and culture in the landscape. For example, the Speech Act Project – which is being done in partnership with the Urban Shaman Contemporary Aboriginal Art Gallery – aims to bring Indigenous languages into the public sphere with art and stories.