Your health is determined more by your postal code than your genetic code.

That was the finding of a report from the Canadian Institute for Climate Choices, released last month.

The Health Costs of Climate Change: How Canada can Adapt, Prepare and Save Lives 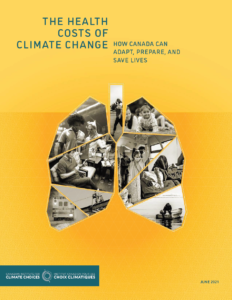 is a wide-ranging, landmark report with a bold message: climate change will make health inequities in our society worse. The risks of climate change, such as extreme heat and increasing incidence rates of Lyme disease, interact with vulnerabilities that some people already face, such as poverty and racism. Failure to address these systemic issues will result in more health-related costs, more illness and more unnecessary deaths.

The report builds on the work of our project co-managers Eleanor Setton and Dany Doiron, and principal investigators Jeff Brook and Michael Brauer who published a study in 2020 looking at air pollution, green space and walkability in Toronto, Montreal and Vancouver. The study looked at these neighbourhood features within the context of low-income communities and found that lower income Canadians are more likely to live in neighbourhoods that have less green space, more air pollution and which are less walkable than higher income neighbourhoods.

The study highlighted the double burden that many people in our largest cities face. On the one hand, they have lower incomes which puts them at greater risk for worse health outcomes. At the same time, they live in areas that lack features which promote better health, such as walkable streets or green space, or that actively produce worse health outcomes, such as higher levels of air pollution. Taken together, low socioeconomic status and environmental inequity produce neighbourhoods that are in greater need of support. It concluded that resources should be prioritized to address the inequities in these neighbourhoods.

Citing this work, the Canadian Institute for Climate Choices report made two recommendations that would begin to address these inequities: Government agencies should consider how climate change health impacts will be distributed across society; and governments should invest in research in climate change impacts to better understand the regional and local health implications of climate change, including the exposure and sensitivity of disadvantaged groups.

The recommendations recognize that climate change will impact communities differently across Canada. That means not only will Toronto, Montreal and Vancouver face different climate-related challenges, but neighbourhoods within these cities will be impacted differently. Disadvantaged groups are more likely to be exposed to health hazards from a warming climate. Green infrastructure, in particular, plays an important role in mitigating heat, yet our project co-managers and principal investigators found that inequity in access to these features of the built environment could amplify the overall number, frequency, severity and length of extreme heat events in lower income neighbourhood.

The Canadian Institute for Climate Choices report says governments need to treat the symptoms of climate-related health impacts and address the root causes of health inequity. That means creating temporary shelters and improving housing security; increasing awareness of climate health impacts and building infrastructure to mitigate those impacts in communities, in particular greening initiatives such as urban tree planting to mitigate the impact of heat waves; monitoring warning signs of health hazards and increasing access to health care for disadvantaged groups.